Warlord Saga is a free to play browser based MMORPG where players get to travel around the vast world, levelling up their hero, acquiring new items and gear to make them stronger as well as recruiting various companions to aid them in their fight. Set in the Three Kingdoms era of Ancient China players take on the role of a wounded stranger appearing in the peaceful riverside village of Changshan and quickly find themselves involved in a battle against the rebels of the Yellow Turbans. Warlord Saga can be played directly through your web browser after a quick online registration and requires no payment or subscription fee to play but holds the option of purchasable premium currency (Tal) to spend in game on various perks and buffs.


Rising Cities is a free-to-play browser-based construction/management MMO, produced by Bigpoint, which will let you became a virtual mayor who have to build and manage his very own city. But getting to the top is long and arduous. Only with proper planning, good resource management and a consciousness for the well-being of your citizens you will become a powerful and respectful mayor.

In order to progress in the game, players will have to create healthy living spaces for their residents, collect rent and invest in industry, power generation plants, transportation systems and a plethora of additional constructions essential for a flourishing metropolis. Just like a real city, their online metropolis requires a vast amount of resources and energy.


Set in the world of Rhynn, Fantasy Rivals is a free-to-play collectible card MMO game developed by Boostr for web browser and iOS/Android devices. Players have to prepare themselves to face their opponents in intense strategic battles to move up in the rankings and finally reach the prestigious Diamond League. The very best players might even join the 200 Masters of the game. They will discover hundreds of Heroes, complete epic quests, and meet players from all over the world while getting powerful Heroes and leveling them up.


GoalUnited is a browser game mmorpg where the player will manage an entire football team. The player needs to manage all the aspects of the team such as football players, buy and sell the players, build and manage the new stadium and so on. 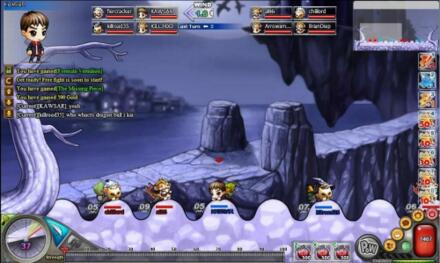 The downtrodden and defeated Amnezy is on the hunt for revenge against the heroes that make up those nine Guilds of protectors that dwell within the world known as Eredan, famous and ferocious adventurers who thought they had seen the last of this mischief maker. Using her power Amnezy has successfully captured the heroes leaving this world bare and in peril whilst she makes them fight for her own entertainment in her own private arena. Here allies will be forced to fight against each other and enemies stand side-by-side as companions in this twisted and bloodthirsty game.


Edgeworld is a browser based MMO where your skills in management and in battle are the keys to save the galaxy! The game, easily playable with the web browser without any client to download or to install, begins with a small base located in alien ruins in which there are yet enough resources to develop an army.

There are four kinds of resources: crystal and gas (needed to create main buildings), energy and uranium (needed to train and to upgrade your army); equally there are four main actions you can carry out to develop your base: to build, to research, to research defense and to train troops. Going on playing the player can train mechs and use an academy too.