Xiah is designed to give users the hitting feeling of games, even from the initial planning stage. The game offers speedy game processes to maximize users concentration on the game. Xiah is designed to enable users to experience the fantastic martial arts of characters, and to play the game in an optimal environment by adopting the three basic concepts of HCI (Human Computer Interface), such as game support level, convenience, and esthetic configuration. We would like to invite you to the martial arts world full of fun and hitting.

The company invites you to the martial arts fantasy world of Xiah,that presents splendid graphics effects which can be experienced only within a martial arts game, as well as the true sense of hitting.

Is there any other oriental martial arts online game that is full of fun and hilarious hitting? Xiah is designed to give users the hitting feeling of console games, even from the initial planning stage. Another point of pride of Xiah is the brilliant graphics effects of martial arts, which make the user believe that he/she is witnessing martial arts movements in the real world. With Xiah, a user can feel the essence of martial arts through the thrilling sense of hitting.

The worldview of martial arts is clearly reflected into Xiahs community system. Players can establish various kinds of communities with other people in the cyber space, such as teacher-student relationship, large-sized clans, and a temporary cooperative community called group. Furthermore, Xiahs unique emotion system supports various actions fully expressing players¡¯ feelings. Please, meet Xiah and let yourself be led to the true world of martial arts by bringing in the thrilling sense of hitting. 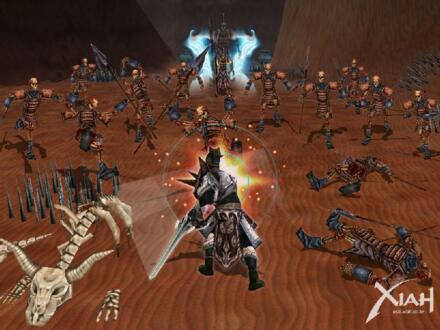