There are eight different characters for players to choose from within the game, each with their own in-depth background, personality and fighting style, though each can be customised by the player to achieve their own personalised look. Choose between the spear wielding Lynn who dances around the battlefield with form and a deadly grace she cuts down her enemies with ease, this doe eyed warrior should not be underestimated or the swift and powerful archer Kai, he is able to handle himself in long ranged combat and can be equally as devastating in melee combat with his dextrous dodging grapple ability.

The game itself can be played in single player or party play mode where players pick up different quests and explore the world in search of adventure, coming face-to-face with challenging enemies, monstrous creatures and dark evil. To be successful against some of the game’s greatest challenges and bosses players will have two learn to work together to overcome these foes, utilising their own abilities and working as a team. Players will delve through dangerous dungeons and in time come across a valuable and rare items and components to craft and customise their own gear using the Enchant system and customise the look with the Dye system to add style to their functionality. With extensive fighting armour can be damaged and ultimately destroyed so players must ensure they return to civilisation once in a while to get repairs.

Battle is an ever evolving fight where players can come up with multiple ways to defeat their enemies, building up combo attacks and chaining together different manoeuvres to overcome their enemy or utilising the environment where almost everything in a battle can be used as a weapon including and enemies’ own weapons. Players must watch over their health and be conscious of healing themselves using potions to replenish their health and stamina or Feathers that are able to revive unconscious players that have fallen.

The main story arc reveals a compelling epic saga and is slowly uncovered as players complete the ongoing quest line, aside to this are side stories that further expand the game world and help immerse players into this fantasy realm. On their journey players will be able to train up their skills using Ability Points when accomplishing various different goals in battle, players are able to only train up one skill at a time and must train it up to the next level before they are able to begin training in other.

By completing various events and quests in the game players can earn Battle Points, which are used primarily to unlock more battles that they can access, primarily earned from completing mission primary goals, side quests or Oaths of Honor (a personal mission that they must complete in a battle).

The world is more than a battleground and the towns in particular have the hustle and bustle expected of any social hub, particularly players are able to trade with NPC’s who can be a valuable source of items such as weapons, armour, potions and more and any components needed for crafting. Alternatively players can head over to the Marketplace which is a real time trading area run by players where users are able to trade with each other, haggle, negotiate or place items directly on the marketplace for automated selling.

Vindictus is a free to play game but players can spend real-world currency in the online shop, either the Avatar Shop or the Supply Depot. The Avatar Shop allows players to purchase additional character customisation options including hairstyles, teachers and ponder clothing, whereas the Supply Depot lets players purchase items that can boost them in battle such as Restoration Potions, Inventory Expansions and more. 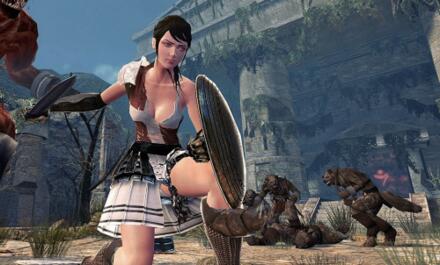