Developed by KOEI for Windows, based on the Rekoeition Uncharted Waters series of games, Uncharted Waters Online (referred to as Great Voyage Online in Japan) is a MMROPG set within several timelines during the Age of Exploration as a romantic and historic fictional account of the era.

The game can be divided into sea-based areas, land-based areas, and towns. Players will live and play real world of 15th century to make their own history. Players may choose from among 6 nation-alities: England (a small island country to the north for whom wool is the key industry), Dutch Republic (a rising maritime courier nation facing the North Sea), Ancien Régime in France (an agrarian kingdom holding territory from the Mediterranean to the North Sea), Spanish Empire (a powerful authoritarian kingdom dominated by the royal house of Habsburg), Kingdom of Portugal (a mercantile nation that prospers by trade from profits of the land facing the Atlantic Ocean), and Republic of Venice (a small city-state floating on the sea). As well the player may choose from several occupations after choosing a basic class: adventurer, merchant, and soldier. Players are able to trade, explore, battle and join in live events such as "Great Sea Fights". 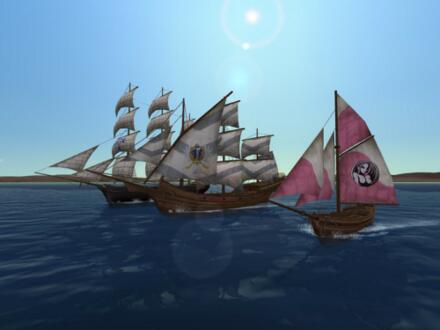