The key feature of Entropia Universe is its Real Cash Economy, where every item in the game has both an in game currency value as well as a real-world currency value, what this does is allow players to purchase items in the game using either currency as well as selling them. The in game currency is known as Project Entropia Dollars (PED), where typically 10 PED equates to 1 real-world dollar, players are able to acquire items in the game and use them to get ahead or cash them in and revert them to real-world currency essentially allowing players to make money through the game.

An important factor with the game is that it costs currency to do most activities, in one form or another. Whilst players are free to go and hunt animals or mine resources and minerals, the components they will need for digging up resources or the ammo that they use for killing animals all has a cost to it and so whilst not required the majority of players will spend some real-world money in order to progress.

Similarly all items have degradation through use, including weapons and armour and other items, where some items are labelled as Limited so that once they have reached zero durability the item is useless, whereas other items have Unlimited use’s other once they reach zero they can be repaired at a terminal (which once more costs money).

Players are able to level up in a wide range of skills, though access to all items and their use is not limited a skill level essentially allows the player to use an item with the least amount of wastage and most proficient use. For example, if a player uses a weapon that is much higher than their skill level then they will not get the maximum damage output from that weapon and will still gain the same amount of durability loss, which means the player would be wasting money on both ammo (as they would miss most of their shots) and item degradation. Finding the balance between the amount of money you can make from an activity versus the amount of money it costs to do it is one of the key strategy elements to playing the game.

As well as hunting animals and mining resources players can also construct components and items at the Manufacturer Terminal using learned blueprints (they gain following the Limited and Unlimited method where some blueprints can only be use a certain number of times). Crafted items can be used or sold to other players in person or through the Auction Terminal. Players have the option of trading in items at the Trade Terminal for the base TTV price (Trade Terminal Value), though this is often far below the Market Value that is based off auction prices through player trade.

PVP combat is also available in the game in certain areas, typically these PVP locations are open world areas that are easy to access and are considered Non-Lootable PvP Zones, where once the player dies they simply respawn at a respawn point. However, some areas are classified as being Lootable PvP Zones, where if a player is killed then any stackable items they have on their person can be looted (including a valuable resources). There are a few gates that players must pass through so that they don’t accidentally stumble into these locations such as having to take a Toxic Shot to enter these “contamination zones” (if they don’t take the shop then they will instantly die once they enter a zone) as well as giving various warnings that players are approaching and entering a Full Lootable zone. Lootable PVP is also available in space when players are travelling between planets in their own personal ships, both players wish to travel about more securely they can use the public Space Stations, though it costs more PED to enter the planet using this method. 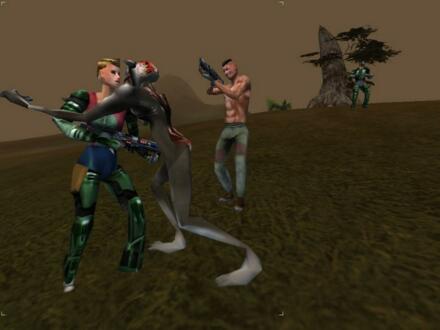