Since its debut on Dreamcast in 2000, the revolutionary PHANTASY STAR ONLINE series has received 17 awards worldwide. Now the PSO journey continues on PC! Each player takes on the role of a Hunter on the Planet Ragol and ventures deep into lush worlds filled with mystery, intrigue, and powerful enemies. You'll battle in real-time and draw off the magic of more than 1,000 powerful rare items as you continue to search the planet for survivors of the Central Dome explosion, as requested by Governor-General Tyrell.

New Quests!
Thirty three quests have been created from the offline portion of the PSO story. Visit the Governor-General and receive up to 15 quests, or get to the Laboratory to accept 18 quests that await you there.


Customize 12 characters
A new character named Momoka is introduced through one of the Governor-General’s quests. Also, new morphing technology allows you to customize your character’s face, hairstyle, clothing, and body size.


Play from any PC
Your character data is held on a server allowing you to play anytime from any PC that has Internet access and PSO Blue Burst installed.


Team Features
Join a team and chat with other members at any time via “Team Chat”. The “Team Point Ranking System” allows you to compete and it converts undesired rare items into team points.


3D Battle Action
Outstanding sense of realism where results of battles are determined by player’s ability and the parameters of the player’s character. Customize your command palette for simple, straightforward operations.


Items galore
Collect and draw off the magic of more than 1,000 items throughout your many quests. 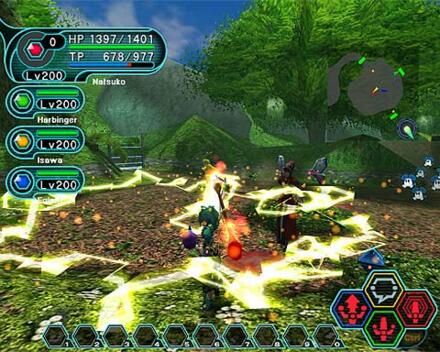