Developed by Aeria Games for Windows, Legendary Champions is a free to play MMORPG/MOBA (multiplayer online battle arena) Hybrid. It features instanced dungeons as well as 5v5 DotA-style battlegrounds which yield persistant rewards. Explore a large, awe-inspiring fantasy landscape where some of the greatest figures from all corners of the world, meet on the battlefield. Legendary Champions draws from a variety of sources, including history, myth, and popular culture.

Choose your class between: Arcanist (Masters of elemental magic, Arcanists are strong offensive fighters), Guardian (While they aren’t heavy damage-dealers, the Guardians are known for their defensive prowess), Battlemaster (Physical burst-damage is the specialty of the Battlemaster class), Mender (Menders are taught the laws of balance, capable of both healing spells and damage), Blade Dancer (Speed counts for everything to the Blade Dancers. With blazing fast attack speeds, the damage adds up fast) or Archer (Attacking from afar, Archers hone their arts to strike from a distance).

Challenge terrible monstrosities with your guild, but be warned, it will take 20-30 highly trained players, acting as one cohesive unit, to take down one of these massive beasts. Guilds able to slay a God Beast will be rewarded with extremely valuable treasure, gold, and prestige. Players looking to spice up their MMO combat experience can engage in thrilling PvP, CTF (capture the flag), and DotA inspired battlefields. Choose your side, transform into your favorite champion, and smash through minions, monsters, towers, and players, on your way to victory.

Choose from over 10,000 different weapons, armor pieces, costumes, and trinkets! Characters have 24 different equipment slots to ensure each character stands out from the crowd. 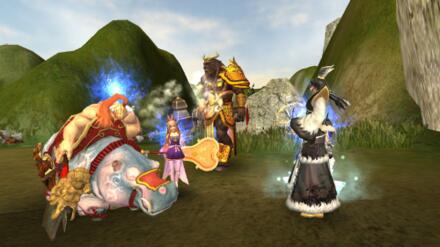