Last Chaos is an on-line role playing game where thousands of players can simultaneously be connected, fight and upgrade their courage and battle skills through adventures, quests and crafting skills with fellow adventurers. It is set in the land of Iris, a place where anarchy, terror and ambition reign after an epic struggle between the Gods
In the world of Last Chaos, the mortal races fight for power and conquest of Iris. In a land of shifting alliances, bloody betrayals and insatiable ambitions, players have full control of their destiny; every action and decision is meaningful and important. Fate rests on their shoulders and they determine the evolution of Last Chaos's story through brutal warfare, brilliant strategy and political power. By accomplishing missions, learning crafting skills and experiencing adventures in the huge and unknown world, players acquire the bravery, intelligence and strength to become the true ruler of Last Chaos.
Advanced Graphics

A powerful graphical engine brings the world of Last Chaos to life like never before. With Bump Map Rendering Technology, a technology that enables high-quality graphics of 20,000~30,000 polygons using only 2,000~3,000 polygons, the game delivers a new level of graphical detail and world interactivity. "Filtering Technology", also known as "Glow-light effect" or "Blur filtering technology," allows for crisper, brighter images and gives the graphics a more realistic atmosphere. Last Chaos is the first online game to make use of this technology.

The "Personal Dungeon" is a private quest mode where players can go solo in an "arcade" style gaming environment. This allows players to experience parts of Last Chaos in privacy, and at a more rapid and exciting pace. Players are also rewarded handsomely in experience and treasure!

With E.R.A.S. (Exciting Range of Aggressive Battle System), players can hit monsters within the sweep of their weapons! Combined with more exciting attack options that many action games don't have, Last Chaos provides more thrills and excitement than many similar action oriented on-line games.

Players are able to craft various useful items, which they can personally use or trade with other players. The Item Malls create a convenient method of trading.

Player Vs Player Vs Environment

Other online role-playing games have PvE - player versus environment (fighting computer-controlled monsters) and PvP - player versus player (human-controlled characters) fighting each other. Last Chaos brings these two game features together in an evolving system. PvPvE manages the complex relationships and alliances between races and guilds; and allows players a chance to test out their fighting skills against other players. Last Chaos will continue to work with players to improve the PvPvE features to make the game more exciting and challenging.

With our new pet system, you can now have a faithful friend and loyal ally in your journey through out Iris. 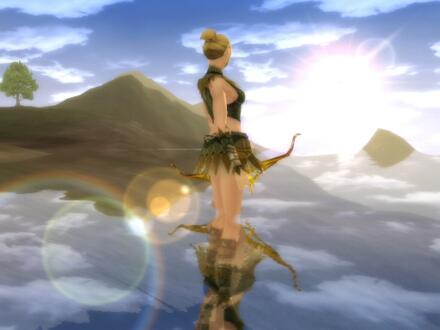