Kitsu Saga (often referred to as KS) is a free-to-play massively multiplayer online role-playing game (MMORPG). Set in a fantasy realm based on ancient Chinese lore, KS offers players a variety of innovative and engaging features, including: Great character customization, a Ktsu “Pet” system, Crafting and Farming, an incredible menagerie of mounts, player-versus-player (PvP) combat, team-based battlefields, challenging dungeons, epic region and world bosses, a player statue feature, in-game bulletin boards, auction houses, a player romance system, robust guild management and communication tools, and a host of quests (solo, party, and guild) that will entertain gamers of all play styles. You can duel players as well as meet on one of the Battlefields to duke it out. The game records every battle, and rewards the top players every month.

In Kitsu Saga, you can raise little fox spirits called the Kitsu. These guys help you in battle, pick up your loot, as well as take care of all your crafting and farming. You can warp to your personal Kitsu Cottage where you can interact with your Kitsu and watch them as they work. Your travel Kitsu will give you combat buffs, pick up your loot for you, and gain aura for upgrading later. To take a Kitsu with you, just right click on the Kitsu’s tablet from your inventory while no other window is open. And your Cottage Kitsu will farm for materials and do all of your crafting. You can issue commands and retrieve crafting items at anytime by bringing up the Kitsu Farm window. Every Kitsu has different Farming and Crafting Skills, an every Kitsu will give you a different passive buff if you choose to take it out with you. Select your Kitsu Wisely. 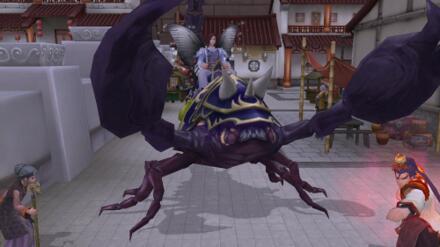