Heroes in the Sky MMORPG

Heroes in the Sky is an intense airborne MMOTPS (Massively Multiplayer Online Third person Shooter) that combines high impact PVE and fast paced PVP as it chronicles the events from the beginning to the end of World War II. Developed by GameUs for Windows. PVP combat is taken to a new level as players must not only worry about the basic danger from in front, behind, and to the sides, but also from above and below. Cannon fire, machine gun blasts, missiles, and bombs flood the skies as up to 16 players shoot it out for air superiority! If that isn’t enough for you, soar across the sky recreating critical battles of the European and Pacific fronts to help your side take control in the occupational war.

It has different gameplay modes. Campaign Mode (Players take flight either for or against the Axis forces in both the European and Pacific Fronts. They will compete against massive waves of enemy fighters, defend fleeing allies, and bomb military installations); Attack and Defend Mode (the thinking player’s version of bloodthirsty PVP combat. Players who enjoy PVP but also like the taste of the intricate field plans that are offered by the Campaign Mode will love the Attack and Defend Mode); Skirmish Mode (This mode is for players who desire raw PVP! Players team up with friends or go at it in a full-blown deathmatch against as many as 16 people); Occupational War Mode (It is an evolving fantasy recreation of WWII. Taking attack and defense to the height of drama, this mode will place the players into the two great battlefields of combat in World War II: The European Front and the Pacific Front); Raid Mode (Imagine a sky blanketed with the best pilots to ever grace war and seas of expert marksmen manning anti-aircraft cannons. This is the raid mode; taking 4 teams of 4 up against the best fighters the development team has currently created and giving them the mission of defeating them all).

Heroes in the Sky features over 50 planes for both the Axis and the Allies which provide players with over 100 planes to enjoy. This does not include the premium planes, bombers, or many avatars players can also choose to use to help optimize their gameplay and improve their strategies.
Cities will be bombed, boats will be sunk, blimps will be blown to pieces, fighters will be torn asunder; all this and more will unfold as players compete to become the top Ace in WWII. 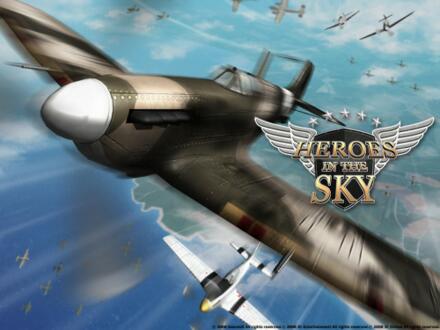 
Heroes in the Sky Videos