Hero Online is a Massive Multiplayer Online Role-Playing Game where players have the opportunity to experience Asian myth and folklore in a martial arts environment. Players will encounter characters and monsters based on Asian martial fiction. By combining the motif of Asian culture with many unique features, players will experience a game like no other in Hero Online!

Classes: There are four basic classes per character to choose from: Warrior, Hunter, Physician, and Assassin. Each class has two upgrades that it can undergo allowing for more skills and better class-specific skills. For every progression, characters must complete certain quests that will reward them with skill books and more. For instance, an Assassin can become a Slayer, who can them become a Shinobi but only after completing their class quests.

Skills: Players will have the option to pick and choose certain skills to either focus on whether it be aggressive skills, passive skills, or both. When it comes to choosing skills, players can pick or choose which skills to equip depending on their need since skills are based on books. Players will have 10 book slots, and will be able to allocate which slot has which book. Since a skill book could have up to 3 skills, players could potentially have a whole arsenal of skills or a small amount. Skill books can be found from talking to npcs, fighting monsters, undergoing quests, or trading from other players.

Gameplay: Every combative action, from normal attacks to special moves, looks like it was taken from a martial arts movie. Even the modes of transportation within Hero Online are fun to look at! Players can move with incredible speeds, fly over buildings, or walk on air. Not to mention being able to ride and fight on mounts!

Pet System: One of the most impressive and unique aspect of Hero Online is its elaborate Pet System. In Hero Online, there are two types of pets, mountable and non-mountable pets. Non-mountable pets have the ability to help their masters in combat both in fighting and defending using a special AI system that the player sets. In contrast, mountable pets can’t attack, but they can carry their masters as well as allow them to fight while carrying them. Pets can be obtained by either purchasing them through an npc or by taming wild animals using hunter skills.

Items: Items will be very important in the game since a martial artist’s weapon is a symbol of their pride and skill. Because of this, Hero Online contains an incredible array of item variation in addition to an intricate enchant/disenchant. This is of course on top of an immersive crafting system where PvP is required/optimal to obtain necessary materials.

Game Content: The storyline of Hero Online was created by a collaboration of renowned authors known for their work in Asian Martial Arts Fiction. Players will actually have the opportunity to take part in the story and see how it progresses as they play the game. Through story-specific quests and game content, Hero Online has the feel of a single player RPG where the character must solve the mystery and fight the bad guys while still maintaining the essence of an MMORPG. 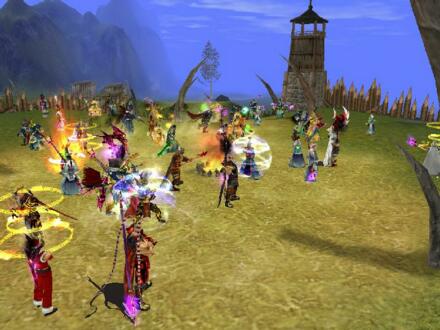