Developed by Hi-Rez Studios for Windows, Global Agenda is a free to play 3D third person shooter MMO with an unique fusion of shooter-based action, role-playing mechanics and grand territorial strategy gameplay. Players assume the role of an elite special agent with futuristic gear and weaponry, and battle enemy agents and robots for survival, technology and territory.


In the wake of severe global disaster, the political face of 22nd century earth has changed and player-created factions scheme against each other for power. Traditional full-scale wars a thing of the past, factions must rely on covert agencies, teams of elite special operatives able to seize and defend key facilities. The future of humanity is their battleground, where knowledge is power, technology is a race, and everyone has an agenda.

The players control the world of Global Agenda, forging alliances with their peers and executing lightning strikes against their enemies. They determine which factions to aid and which to oppose, while the only thing that stands in their way is other agencies.

* Develop your agent - Create, extensively customize, and improve your agent character over the course of your career, complimenting your FPS skills with RPG-style progression and high-tech gear.

* Advance your agency - Join a player-created agency, compete in technology races for advanced equipment, and capture critical locations to increase your influence in the world.

* Experience a dynamic, player-driven world - Agency leaders navigate through a global conflict of other player-run groups, striving to reach their goals first. Territory, resources, technology, and influence are all valuable commodities, with agencies engaging in politics, intrigue, and outright deception to control them. 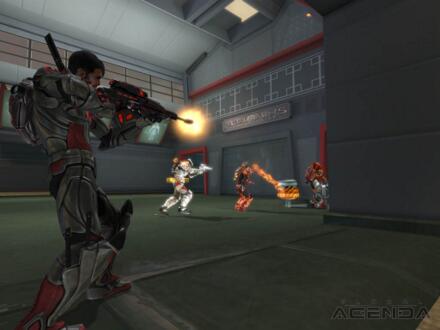