Developed by Icarus Studios for Windows, Fallen Earth is a free to play massively multiplayer online role-playing game set on a post-apocalyptic Earth in the year 2156. Within the Grand Canyon Province, an isolated pocket of settlements around one of the world’s most amazing landmarks, you’ll face threats to mankind’s continued survival, including everything from irradiated zones to mutated beasts to raiders. Six factions struggle for dominance in the Province. Over time, you’ll have the chance to pick a side in the effort to hold sway over what remains of the post-Fall world.

The camera can be moved to alternate between third and first person modes. Players will need to manually keep their targets in a targeting reticle to actually hit them in combat. Skills can be used to influence combat in different ways, but again, enemies must still be manually targeted. There are three main methods of dealing damage in the game. These are broken down by weapon’s effective ranges. Rifles, pistols, and melee are the primary weapon types. Rifles specialize in long distance damage, but are capable of using some short distance weaponry. Pistols are considered the most balanced of the weapon types, able to do damage at medium to short range. Melee is the short range up close damage.

Fallen Earth offers a variety of subscription levels, from the F2P “Scavenger” to the ultra-deluxe “Commander.” Free players face a few restrictions, including crafting limitations, no access to global chat, only one character slot, and a slower rate of gaining XP and AP. The better subscription levels offer discounts to the game’s store, faster progress in the game, monthly gifts, and a full range of features. 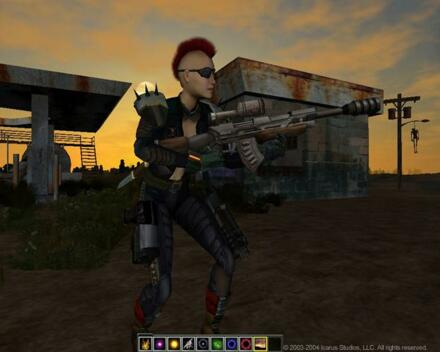