Berserk Online is a Free to Play Online trading card game based on an extremely popular Russian collectible card game, developed by Berserk for Windows. Players in Berserk Online can challenge each other using their own deck of cards. Each card is a creature with its unique abilities and features and there are more than 350 cards available in the game. Berserk Online can be defined an high strategy game, given its mix of classical trading card games gameplay and its unique board games elements which make the game even more strategical. The world in Berserk Online is divided into two Realms: Light and Darkness. Each player entering into Laar should decide which side to serve and protect. Berserk Online combines the richness of a trading card game with the strategic focus of a board game, in facts before starting a game you’ll have to place your cards on a board where you can face your opponents and look for the best strategy to defeat him. The world of Laar: a world where once upon a time blue oceans danced with the waves and virgin forests were to be found everywhere across the landscape. And there was magic, a useful magic that would help everyday life’s activities. That was before the Cataclysm. Play on the battlefield, an imaginary rectangle, 6 squares in height and 5 squares in width. Players’ armies are placed next to each other and facing each other. Each army uses its own half of the battlefield. In the beginning, cards are placed face down so that the opponent does not see your battle formation. If a player has symbiotic cards, those cards are placed down on top of the cards, on their host. Player one (attacking player) uses the central area of his part of the battlefield (3×3 squares) to deploy his army. Player two (defending player) can use 5 squares of his first row for placement of his army.

Get your starter deck, which consists of 30 cards. Players can improve starter decks by combining different cards from starter sets and booster packs. Booster packs are sold separately and each of them contains 7 random cards. A player’s deck cannot contain more than 3 copies of the same card. There can be a maximum of 50 cards and a minimum of 30 cards in a deck. There are 5 realms in Berserk (Swamp, forest, mountains, plains and dark forces) and neutral cards, which do not belong to any realm. There are three types of cards in Berserk: creatures, lands, and artifacts. Creature cards have all characteristics, above the illusitration. Terrain only has the cost characteristics. Artifacts have cost and life characteristics. Berserk Online features every months many different events and tournaments that will allow you to win rare cards or free ounces that you can then spend in the shop. 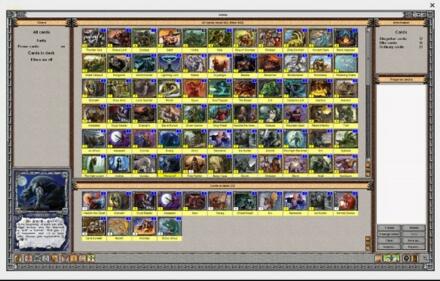