Developed by JoyImpact for Windows, Aika Online is an epic fantasy MMORPG. Five nations vie against one another for control of Arcan in massive castle sieges, relic thefts, and customized battlegrounds, waging war on a scale never before seen in an MMORPG. Considerable treasures and blessings await the most powerful nation in Aika, with each nation ruled by a player Lord Marshal whose supreme power is supported by a guild regime. Designed to re-imagine the “massively” in MMORPG, Aika presents three major PvP modes which run the gamut from small skirmishes to 1000 vs. 1000 warfare. This comprehensive PvP system is unique among current MMORPGs for its gigantic scope, and it is this element – along with a fantastically detailed world and sweeping storyline – which has earned the game many enthusiastic reviews for its quality of play.

With over 1,000 quests, hundreds of monsters, and 15 gorgeously rendered areas, Aika holds its own as a thrilling single-player experience. However, it is the depth of the PvP system that sets this game apart. The world of Aika features five nations – each possessing its own distinct personality and populated by thousands – which, along with a comprehensive guild system, lays the groundwork for truly epic military clashes. Guilds and nations may ally with each other in exciting Castle Sieges to gain control of a nation and lord over its subjects, while entire nations may scheme with and against each other to win wars with glory, treasure, and powerful ability enhancements at stake. Choose your class between Warrior (Towering, brutal, and relentless), Paladin (a pillar of support and a very well-rounded class, particularly with regards to defensive might), Rifleman (Precise. Stealthy. Fatal), Dual Gunner (Bold, agile, and elegant, she cleans up any and all comers with a hail of deadly bullets from the two pistols she draws faster than a blink), Warlock (master of offensive magic, especially of the dark variety) or Cleric. 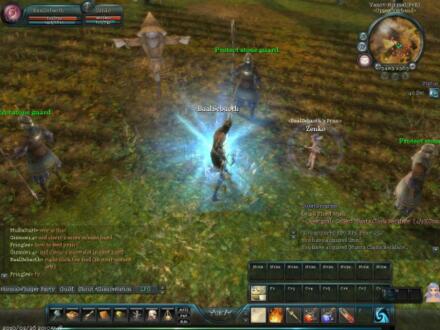