Developed by Funcom for Windows, Age of Conan: Hyborian Adventures is a MMORPG based on the world and works of acclaimed author Robert E. Howard. In Age of Conan, players enter Hyboria with thousands of their friends and enemies to live, fight, and explore the dark and brutal world of King Conan. It features an advanced combat system lets you choose every cut, thrust, and swing in real time, groundbreaking graphics plunge you into a world of breathtaking beauty, a massive fantasy world based on over 75 years of books, movies, art, and music, developed in close collaboration with Conan Inc. to ensure the most realistic Conan experience ever seen, an unprecedented character development and customization system with combo attacks, skills, special abilities, and deadly spells ensures no two characters are exactly the same and an extensive story-driven single player adventure to start the game drawing you deep into the scheming, seduction, intrigue, and betrayal of Hyboria.

Choose your race between: Aquilonians (people divided behind a front of unity, and threatened behind a show of dominance), Cimmerians (never saw a cimmerian who drank aught but water, or who ever laughed, or ever sang save to chant dismal dirges), and Stygians (an ancient, decadent people, born of a culture more than fifteen hundred years older than any of their neighboring kingdoms to the north).

And choose your class from: Assassins (Assassins are the most lethal killers in Hyboria), Barbarians (Their combat style focuses on strength, aggression, and relentless assault), Bear Shamans (The spirit of nature is strong in Cimmeria and has begun to manifest itself amongst the barbarians of the north), Conquerors(Conquerors are a sword-wielding fusion of heavy armor and battlefield command), Dark Templars( Dark Templars combine heavy armor, martial prowess and blood-thirsty magic with an all consuming desire for triumph), Demonologists (wielding the power of hell and earth and capable of conjuring pillars of flame or titanic storms of electricity), Guardians (Guardians are the most heavily armored and well drilled soldiers in Hyboria), Herald of Xotli (Heralds of Xotli are hybrids of the mage and soldier archetypes who wield alien spells and two handed weapons, making them a formidable enemy on the battlefield), Necromancer (Necromancers summon and command the undead, and they are legion), Priest of Mitra (Priests of Mitra wield divine power that can aid, heal, and even bring the dead to life), Ranger (Rangers are the finest marksmen in Hyboria, capable of stalking an enemy and delivering devastating shots with pinpoint accuracy) or Tempest of Set (These priests wield the awesome destructive might of Set, the snake god of Stygia).

The Real Combat engine is based on five directions, or ways, of attacking an opponent with a sword, each relating to a directional slash. The point here is that these directions lend themselves naturally to being strung together in combinations. These combos unlock additional damage and faster combat, if done well. At the start of the game, melee characters will only have access to three directional attacks, the additional two are unlocked later as the character progresses in levels.

In this twisted fantasy world, dark magic and brutal combat lurks around every corner, and each man and woman must carve their own unique destiny under Conan’s reign. In the true vision of Robert E. Howard’s dark universe it’s now time for you to become a messenger of death.

- Explore Hyboria, the legendary world of Conan, presented in incredible graphics and sound.

- Emerge as a hero from a story-driven single-player experience and embark into even greater adventures in the multiplayer part of the game. The branching single-player story is created by the award-winning writers behind The Longest Journey, Dreamfall and Anarchy Online so expect a rare treat.

- Experience Funcom’s revolutionary “Real Combat” engine. A new multi-point melee system allows the players to swing their weapons where they direct it, in real-time, going head-on against the formulaic nature of online RPG combat.

- Create player-made battle formations, and command both NPC’s and other players in epic multiplayer battles.

- Form guilds in the multiplayer game and lay siege to hostile castles. Let the catapults sing their merry song of death as the enemy is brutally crushed to a pulp. 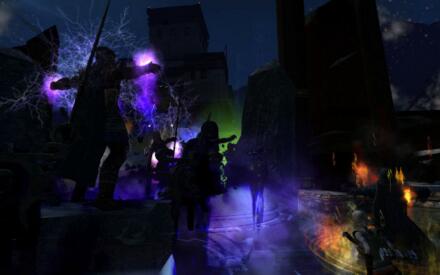